Anthem of the Seas
Loretta Becker

​I just recently returned from an 8 day Bahamas Cruise sailing out of Cape Liberty, New Jersey, visiting Port Canaveral, Nassau, Bahamas & Coco Cay. I was quite impressed with the décor on the Anthem and what she had to offer.
The entertainment onboard the ship was excellent.  We attended the various shows onboard the ship. The Broadway Musical “We Will Rock You” took you through the greatest hits of the British Rock Group “Queen”.  If you were a fan of this band, it definitely took you back in time. My favorite show was Spectra’s Cabaret which was electrifying and entertaining with all of its’ live music, colorful costumes and dance. It’s amazing what they can do with music & technology.
They also had other music venues, like the Hall of Music which hosted a tribute Journey’s Band which was packed every night with these excellent musicians.  If just walking by you would certainly think you were being entertained by Steve Perry.
One evening we decided to pay the menu prices and eat at Brass & Bock Pub which serves craft beer and Pub Grub. It definitely was worth the money as the hamburgers and sweet potato fries were mouth-watering.  We lucked out with an entertainer from Halifax, Tommy Green Jr.  He had the whole pub singing along with him. We noticed that cruise passengers returned every night to fill the house – lots of clapping of hands, laughs and smiles. Almost felt like we were back at a Kitchen Party on the East Coast.
If sailing on the Anthem of the Seas, be sure to Visit the Bionic Bar and have a robot make you a drink. That in itself is entertaining.
The food on the Anthem of the Seas was great. There was a good variety of entrees to choose from.   If you wanted to do some fine dining there was the option of the “Specialty Restaurants” where you paid a cover charge.   We did book ourselves into “Wonderland” imaginative cuisine in an Alice in Wonderland inspired setting.   They offered a 6 course meal with a theme of Sun, Fire, Ice, Sea, Earth and Dreams.  The meal started off with a blank menu that you were given along with a paint brush which you dipped in water and glazed over it and the menu came to life. It was going to be a magical evening of food and adventure.  We would highly recommend this dining to anyone who wants to experience this imaginative cuisine.
There was plenty to do onboard for your teens and children from the Sea Plex that offered Roller Skating and Bumper cars, teen sports games such as Dodge Ball & Basket Ball. They also offer surfing on a Flow Rider and “ifly”Sky Diving.
As we had more days at sea on this ship, you had plenty of time to experience the ship and just laze around by the pool, read a book or indulge in the spa or participate in many of the activities onboard.
Our first port of all was in Cape Canaveral. It was a downpour of a day.  Some passengers opted for the Kennedy Space Centre tour while some families made the day trip to Disney World and others’ just took a taxi and went into Coco Beach to do some shopping.  We were part of the latter group and still managed to have a good time in spite of the weather.
​Our next port of call was in Nassau, Bahamas and we took part in a complimentary tour organized by Ensemble Travel.  (Book a Hosted Cruise with Cruise World and you can receive these free perks too.) The first stop was the Junkanoo Museum which was a very colorful experience. We were able to try on some of the head dresses and then received a crash course in playing the drums and marching around as if we were part of the “Junkanoo Festival”.  We stopped at the Chocolate Factory for a tour of making chocolate and then were able to sample freshly made chocolate right out of the bins. Final stop was at the Rum Factory where we all enjoyed sampling 4 different strengths of Rum.  It was interesting that the strongest one was the smoothest and of course the most expensive. It was a good way to end off the day. We had some free time after so visited a local restaurant to try some “Conch Chowder”.  It was a delicious as I remember.
Our final port of call was at “Coco Cay”, private Bahamas Island which consisted of a day of lazing at the beach, sipping Rum Punch and listening to a Live Reggae Music band.   They hosted a BBQ with a variety of meats, salads, fruit and desserts.  For those that wanted to shop a bit they had a Straw Market and local arts & crafts and souvenir items.   You could also rent private cabanas for the day, play volleyball or participate in watersports.   By the sounds of the comments passengers made…. This by far was their best day!!! 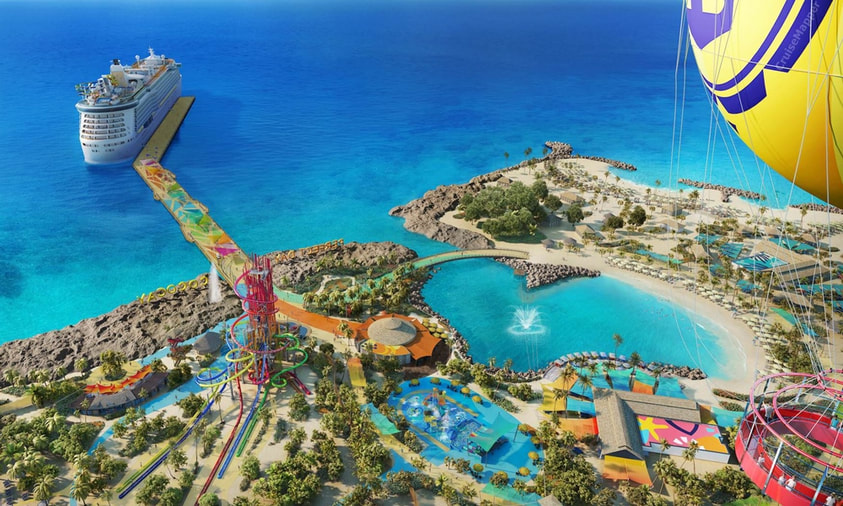